Bumpy Road Ahead for Self-Driving Cars

Wouldn't it be nice to read the paper, check your email and enjoy a second cup of coffee while your driver-less car whisks you off to work in the morning? As you will read here, that reality is closer than many Americans might think. Aside from the new conveniences, autonomous vehicles could also save thousands of lives lost every year in auto accidents. The challenge for regulators, safety advocates and the driving public is managing the transition from our current system to one dominated by fully autonomous vehicles. As with any new technology, there will be several bumps along the way. 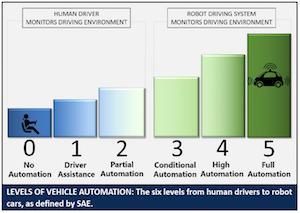 Where We Are Today

Most cars now already feature some form of self-driving technology, from cruise control – first developed in the 1950s – to electronic stability introduced in the mid-1990s to recent innovations like automatic braking, lane departure alerts and self-parking. The latest technologies, like Autopilot from Tesla and Drive Pilot from Mercedes-Benz, automatically steer, adjust speed and brake. Instead of relying on eyes, ears and a brain for control, autonomous vehicles depend on data from cameras, radar and LIDAR – high-tech sensors that detect light – all fed into an on-board computer.

Since we share the road with both old and new vehicles, all with a mix of technologies, the Society of Automotive Engineers created a six-level ranking system. Level Zero, One and Two vehicles still require human drivers to monitor the driving environment. Level Three, Four and Five vehicles put the computer in charge of monitoring the driving environment. Only Level Three vehicles, like the Tesla, are commercially available today. But traditional manufacturers, along with new players like Google and Uber, are testing fully autonomous Level Five vehicles and predict they will be available to the public in the early 2020s.

What Autonomous Vehicles Mean to You 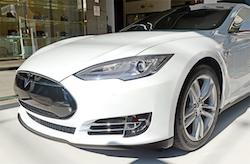 Tesla has rejected responsibility for crashes even when its Autopilot system is engaged.

The most encouraging prediction from the transition to driver-less cars is a dramatic reduction in auto accidents. According to the National Highway Traffic Safety Administration (NHTSA), more than 37,000 people died in auto accidents in 2016 and millions more were injured. NHTSA estimates that 94 percent of crashes are caused by human error. A self-driving car that is never tired, distracted or impaired could dramatically reduce accidents, saving 30,000 lives or more each year.

The reality, however, is that Americans will still suffer injuries and deaths from auto crashes as self-driving technology is perfected. No technology is foolproof, especially when it involves the highly complex sensors and artificial intelligence central to self-driving cars. We’ve also learned the hard way that automakers deny responsibility or cover up manufacturing defects to protect profits. And even if Level Five automation is available to the public in 2020, it will be another 15 to 20 years before all vehicles on the road have the latest self-driving technologies.

In a collision involving autonomous vehicles, the question of liability is murky at best. Is the operator at fault, the manufacturer, the software designer? Unfortunately, the trend has been to blame the operator, with manufacturers suggesting that humans should be ready to take over when self-driving systems hand over the controls. Research shows, however, that humans are not well adapted to re-engage with complex tasks, like driving in an emergency situation, once their attention has been allowed to wander.

As more and more vehicles become completely driverless, it makes less and less sense to hold their human operators liable. Instead, we see strict liability as the best solution, where manufacturers take full responsibility for crashes when the robot system is driving. This same principle already applies to common carriers like bus companies, airlines or train operators, where passengers are completely dependent on the carrier for their safety. Auto insurance as we know it today would be eliminated under this scenario, because who needs an insurance policy if they’re not driving?

Self-driving technologies and eventually fully autonomous cars will likely be a reality sooner than later. Consider these tips along the way: